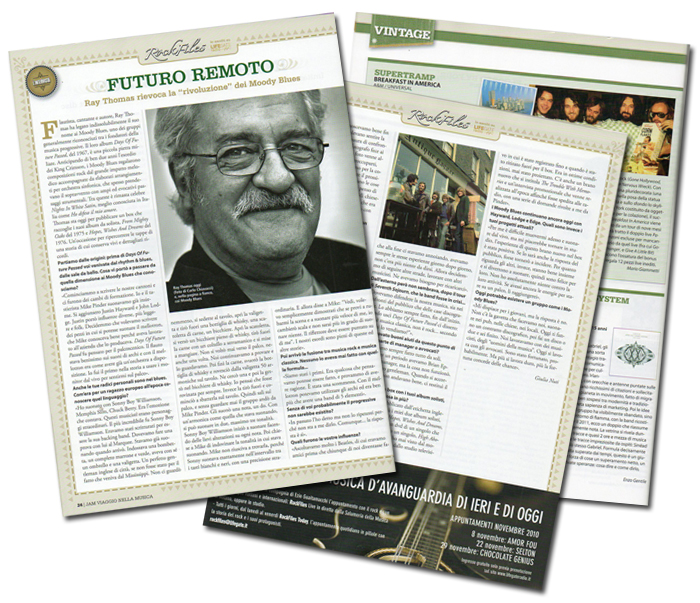 Ray Thomas recalls the "revolution" of the Moody Blues

Flutist, singer and author, Ray Thomas has his name inextricably linked to the Moody Blues, a group generally recognized as one of the founders of progressive music. Their album, Days of Future Passed, 1967, is a small milestone. Anticipating the debut of King Crimson by two years, the Moody Blues rock compositions offer impressive melody accompanied by elaborate arrangements for a symphony orchestra, which often took over with large and evocative instrumental passages. Among these is the still famous Nights in White Satin, better known in Italy as I Defended My Love.

Thomas is now publishing a box collection of his solo albums, From Mighty Oaks, 1975, and Hopes, Wishes and Dreams, 1976. It is an opportunity to retrace the stages of a history that is alive with detailed memories.

We start from the origins: before Days of Future Passed you were coming from rhythm & blues, from dance halls. What brought about the change in the style of the Moody Blues as we know it?

We began to write our own songs, and there were some lineup changes. Keyboardist Mike Pinder and I already played together. We were joined by Justin Hayward and John Lodge. Justin brought lighter folk influences. We decided that we wanted to write pieces in which you could play the mellotron, [an instrument] which Mike knew well, because he had worked in the company that produced it. Days of Future Passed was conceived for the stage. The flute sounded good with the strings, and the mellotron was like having an orchesta at our disposal. I was the first [person] in history to use monitors to hear myself live on stage.

Your personal roots are in the blues. What was it like for European guys at that time to know that language?

I played with Sonny Boy Williamson, Memphis Slim, Chuck Berry. It was the emotion that counted. These musicians were extraordinary characters. The most incredible one was Sonny Boy Williamson. We had been scheduled to be his backing band. We had to do a [sound] test with him at the Marquee. We were already playing when he arrived. He wore a bowler hat, a brown and green suit, had an umbrella and a briefcase with him. [He was] a perfect English gentleman from the city, had it not been for the fact that he came from Mississippi. Without even looking at us, he sat at the table, opened the bag, and pulled out a bottle of whiskey, a can of meat, and a glass. He opened the box, poured a glass full of whisky, pulled out the meat with a knife, and began to eat. He did not ever face towards the stage, not even once.

We continued to practice, and we watched him. Then he finished the meat, emptied the bottle of whisky, and overturned the bag [to pour out] 50 harmonicas on the table. I saw one fall into the glass of whisky. I thought it was ruined forever. Instead, he took it out and began banging it on the table. Then he got on stage, and without ever looking at the group, he went to Mike Pinder. He played a note, a C.

With a harmonica like he was playing, you can play in two, maximum three tones. Sonny Boy Williamson started to play by making minor changes on each note. Then he asked Mike to guess the key in which he was playing. Mike could not find it, because Sonny played precisely in the interval between the normal range. Then he said to Mike: "See, I just wanted to show you that if you try to steal the scene and play faster than me, I will change scales and you will not be able to play anything any more. The spotlight should be focused on me." Our beginnings are full of these and other stories.

Then came the merger of rock and classical music. No one had ever done it with that formula...

We were the first. It was something we thought could be done, and we tried to do it right. It was a gamble. We could use the mellotron loops

and [the effect] was far greater than having a band with 5 members.

Without you progressive rock would probably not exist?

In the past, I have said it, but I should not repeat it because it's not for me to say. Anyway...the answer is yes.

What were your influences?

We listened to a lot of the Beatles. We were friends before any of us became famous. We knew John and George well from [the time they were] boys. At that time everyone wanted to hear the music of others [musicians], and they were not afraid to confront [each other] and exchange ideas.

A photographer made a photo of the Beatles, but by mistake, the photo was stretched. They said: "Not to worry. Instead of tossing it, we will use it for the cover, as we want to call the next album Rubber Soul.”

That’s the way things were at the time. When Sgt Pepper was made, I think I was one of the first to hear about it. They asked me what I thought; of course I said it was extraordinary. And I did the same with them with Days of Future Passed.

What was the most complex session that you have faced?

You play several instruments, most notably the flute. Without focusing on a specific album, what was your personal contrbution to the sound of the Moody Blues?

I also play the harmonica and all types of flutes. In one track, I also played the oboe. Before lunch, in the studio, they told me: "This is the phrase in which you should play the oboe," and they left me there. During the lunch break I tried to figure out how to play it, simply by trying it.

Eventually, your sound became distinguishable (easy to recognize). Were you aware of it?

Sure. However, a feature of the sound of the Moody Blues, besides the importance of the mellotron and our individual contributions, was that we used to sing in four [part harmony]. The luxury of recording on 24 to 48 tracks only came much later. In the beginning, with 4 tracks, we had to squeeze around a single microphone and reproduce parts that we could then record on a mixed track.

Coming from a band with a solid career like yours, how did you begin to realize your need to make solo records?

It was a deliberate act. We knew each other so well that in the end, we were bored. We always had the same experiences, day after day. There was nothing more to say. So we decided to follow other paths, working with other musicians. We needed to recharge.

From the outside, it didn’t seem like it, but after the tour of Seventh Sojourn, the band was in crisis...

We had to defend our music, both to the public and record companies. We've always done, from the beginning. When Days of Future Passed came out, we were told: "It is not classical music, it is not rock... Do you think we can sell it?"

Did you find good help on this point of view from managers or lawyers?

No, we have always done everything ourselves. At the beginning, we had Brian Epstein for a period as our manager, but it did not work. He was a true gentleman. When he realized that things were not going well, he returned the contract.

You are about to release a box with your solo albums. Can you tell me more?

Yes, the box will be released by the English Estoteric [company] and will contain my two solo albums, From Mighty Oaks and Hopes, Wishes, and Dreams, with alternative mixes and a DVD of a single I had never seen from the time it left the television studio in which it was recorded, until the moment it was withdrawn from the box. It was in excellent condition. It had never been screened. There is also a new song which is titled The Trouble with Memories, and promotional interview that was made so it could be sent to a radio station at the time, with a series of questions put to me by Pinder.

The Moody Blues continue to this day with Hayward, Lodge, and Edge. What are your current projects?

For me it is difficult to move and play live now, but I'd like to go in the studio. The experience of this box set was positive. If the public response is also positive, I may go back to recording. As for the others [in the band], however, they go together well and have fun playing, so I'm happy for them. I have absolutely nothing against their activities. If I had more energy to stand on a stage, I would rejoin them.

Today, could there be a group like the Moody Blues?

I'm sorry for the young, but the answer is no. There are not the gigs that we did, playing in pubs, local churches. Today you make a record, do a little disc or two, and you're finished. We worked with musicians, "men of music." Today you work with lawyers. I was lucky, probably. But the more you work hard, the more fortune gives you a chance.