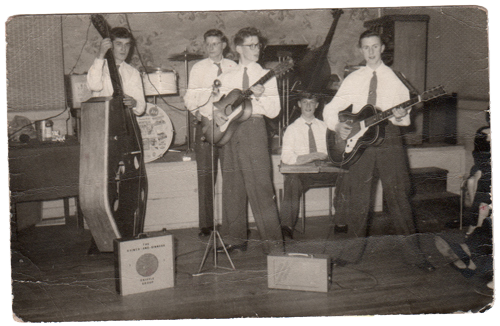 The Saints and Sinners were formed by Mike Brassington in March 1958. A skiffle group, inspired by Lonnie Donegan, they played gigs in and around Erdington, Birmingham. Ray, who had been a tool maker trainee at Lemarks since age 15, heard the band was looking for a bass player and looked up Mike Brassington. At the age of 16, he launched his musical career playing a one-string, electric double bass known affectionately as “The Coffin”. The skiffle group became a vocal and rhythm band that continued on until June 1959 when it disbanded scattering its members to join other groups or form a new band.