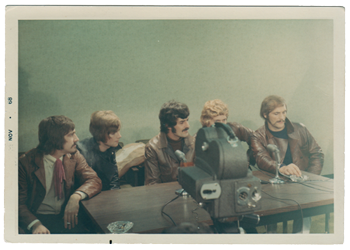 ohn Lodge, Ray’s friend from El Riot days, was enlisted to replace Clint as bass player. Ray ran into Eric Burdon of the Animals at a pub one night and mentioned they were looking for a guitar player. Eric had just run an ad in The Melody Maker magazine but had hired a guitar player before the ad even came out. He said he’d be glad to send over the dozen or so letters he’d received inquiring about the position.

The first letter they opened was from a Justin Hayward. Mike rang Justin up and explained how they had received his info and would he like to do an audition. Within days, the Mach II version of the Moody Blues was complete. It would take a few gigs to convince the 5 that R & B wasn’t the way for them to go, it was time to change the path of the band. They started writing music for a stage show, a complete change from the ‘Go Now’ days. Before they had completed the new music they were summoned to Decca. The band was in debt to Decca, in return for forgiving this debt, Decca wanted The Moody Blues to record a rock version of Dvoraks “New World Symphony”. It would be a collaboration with world renown conductor Peter Knight. Decca would release it on the Deram Records label to demonstrate their new Deramic Sound. It was not something the lads were particularly interested in doing but in those days it was almost impossible to get studio time to record an entire album. The most the studio would allow was 3 hours to do a single and a B side. Enter Tony Clarke.

Tony was a junior producer with Decca and a musician and he was assigned to the Moody Blues to produce their part of the demo record. Behind closed doors, the Moodies presented their stage show to Tony as what they really wanted to record. Tony convinced Peter Knight to go along with this new recording. The Dvorak scheme was literally hijacked with Tony Clarke putting his job and career on the line. The finished album was presented to the Decca board, who were horrified but another champion in the form of one Hugh Mendl stepped forward to back the album, ‘Days of Future Passed’. To everyone’s relief the album took the music world by storm. It was the start of progressive rock with the album climbing to number 27 in the UK album charts. Five years later it would hit number 3 in the US Billboard Charts. The Moody Blues were a cutting edge band with a mellotron (Mike Pinder) a rock flute (Ray Thomas) and songs that flowed one into the other. A format that drove dj’s mad as they were use to playing singles that began and ended when they should. The Moody Blues recorded 7 albums between 1967 and 1972. By the time the last album, Seventh Sojourn was released on 17 November 1972 the band decided they needed a break. They had been virtually living in each others pockets for 5 years and the strain of touring was beginning to take it’s toll.