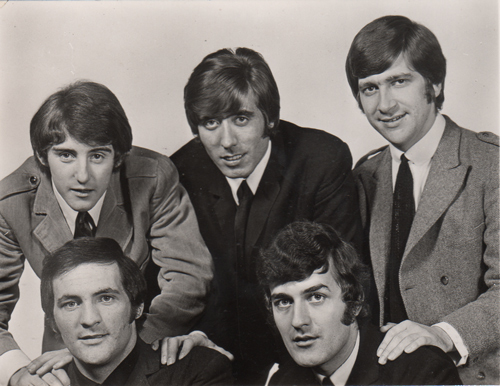 Back in Birmingham and completely thawed out Ray and Mike had a look around for some Brummie lads wanting to start a new band. Denny Laine, guitarist/ singer, formerly of the Diplomats was then living with Graeme Edge, drummer, formerly of Gerry Levene and the Avengers. The two teamed up with Thomas and Pinder and Clint Warwick, bass, formerly of The Dukes, to form the R & B group, The Moody Blues Five. The Five was subsequently dropped, the band would forever after be The Moody Blues. In no time at all, the Moodies were taking Birmingham by storm. A demo acetate sent over from the States was to give the band a number one chart busting song. “Go Now” by Bessie Banks was rearranged by the band and released in November 1964. The next single didn’t fare so well. Released in May 1965, “Bottom of My Heart” was the first song on which Ray played flute, alto flute. “Magnificent Moodies” the first and only album of the Mach I Moodies was released on 22 July 1965. The lads were still very popular in the clubs and appeared on several TV shows, including ‘Ready, Steady Go!’, ‘Saturday Club’ and ‘Shindig Goes to London’. On 3rd December, the band embarked on a 9 date England tour as the support group for their good friends, The Beatles. After the first rush of success with ‘Go Now’ the band just couldn’t seem to find another hit. By September 1966, Clint Warwick had decided to leave as living in London and touring was taking a toll on his family. Denny Laine was not long behind him, leaving in October to pursue a solo career. Once again Ray and Mike were left to find replacements for their band.